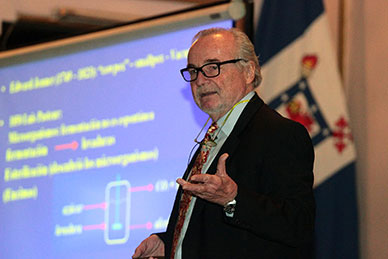 Although most people are not aware of it, biotechnology is applied in everyday life; for example, this discipline is responsible for the design of new and better vaccines or recombinant proteins that help to improve people’s quality of life. Like the development of self-administered insulin treatment for diabetes. “Currently, the cost of insulin has been reduced because it is developed in bacteria; 30 years ago, this idea, and particularly the idea that someone could inject him/herself, was beyond imagination,” Julien Hanna, explained. Hanna is the president of the organizing committee for the III National Congress of Students of Biotechnology Engineering that was started on November 03rd and will continue until November 07th, at Universidad de Santiago.This is the first time that our University hosts a meeting with students of this field coming from all over the country. For the opening session more than 160 students were registered and they belong not only to the field of biotechnology but to related fields like bioengineering and chemical engineering.Julien Hanna, senior student at the Biotechnology Engineering program and president of the organizing committee said that, just like it happened at previous congresses, the activity was focused on a specific topic. On this occasion, the central topic was the industrial applications of biotechnology in Chile.“We wanted to orient it to a more industry-applied focus, with the Universidad de Santiago’s approach,” he said. He explained that, as it is a rather young university program in our country, many people still do not understand the extent of its development and its potential for growth in different areas.The organizing committee, made up of twenty students of the program, expect to “generate networks among students of the different universities, because it is a very new program. The idea is that the future professionals meeting here get to know each other so that their ideas become future opportunities,” he said.A recent historyThe master class “Systems Biology: Biotechnology of the 21st Century” that opened the congress was given by Dr. Juan Asenjo, the recipient of the National Award of Applied and Technological Sciences (2004), a chemical engineer of Universidad de Chile and one of the founders of the Center for Biotechnology and Bioengineering of Chile (CeBIB, in Spanish).During his presentation, he talked about the beginnings of modern biotechnology, mentioning the discovery made by Edward Jenner in 1796, who found that milkmaids were immune to smallpox as they worked close to cows.Then he added Luis Pasteur’s discovery of the role of yeasts in fermentation that allowed Alexander Fleming to find that in the presence of Penicillium notatum, there were no bacteria. The scientists Howard Florey and Ernst B. Chain were able to purify penicillin, giving rise to the production of antibiotics. They were awarded a Nobel Prize for this.Later in the 20th century, in the 60s, genetic engineering was started with the first product of modern biotechnology: human insulin made from bacteria.Since then, the developments in biotechnology have got closer than expected. However, according to the interdisciplinarity that supports this area of research, professor Asenjo suggests that instead of having a disassembling approach to the study of biology, a systematic view should be preferred.Presence at daily lifeBiotechnology is based on the use of living or biological organisms (or part of them) to solve daily problems, using a multidisciplinary approach that in the case of our University, is supported by an engineering base and a mathematical interpretation of the natural processes, associated to an essential pillar of sciences like biology and chemistry.Biotechnology has a wide scope of applications in different professional fields. During the opening ceremony, Cristián Vargas, Vice Dean for Research and Development of the Faculty of Engineering spoke on behalf of the Dean and expressed “the best wishes for the success of the congress, because for our University it is important to receive people of this emerging and significant field of specialization,” which reflects a technological science oriented to innovation. For his part, César Huiliñir, chief of the Biotechnology Engineering program added that this is not the program of the future, but the program of the present.Other specialists that will participate at the III National Congress of Students of Biotechnology Engineering are Claudia Ortíz, Diego Villagra, Silvio Montalvo, Roberto Rozas, Cristián Hernández, Angélica Reyes, Julio Romero and Rubén Bustos. For further information, check www.coneib.cl (external link).Translated by Marcela Contreras